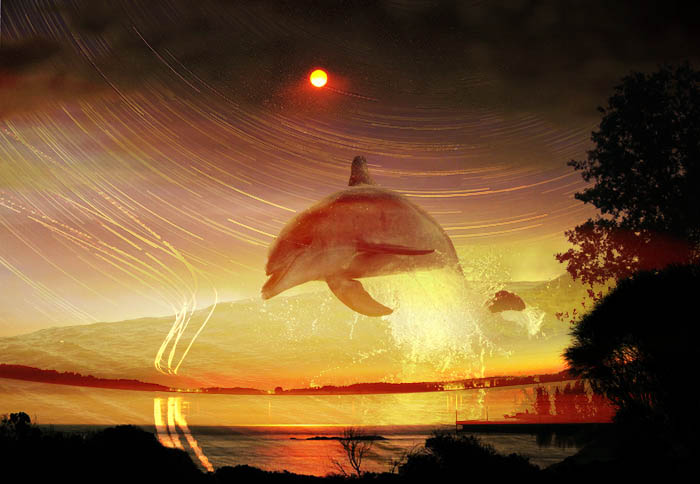 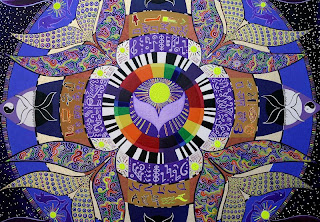 Hunab Hiku (centre of painting) by Jeff Phillips
"Whale Cry"
Last night, the whales were crying out.
I picked up on the wave of urgency in my dream.

The dream was so real, I feel like the whales were communicating with me, and the message was a message of sadness. Look what's happening to us, look at what people are doing. I've always felt that if the last whale dies... it will be over. For us, for life, .. the whales are stabilizers of the planet, they navigate by the stars, they balance energies by making journeys, they are the higher consciousness of the earth. We can learn from them, if we open ourselves to it. They send waves of joy, inspiration, love to the land for who-ever (people, animals, plants, trees, rocks...) can pick up on it. But they have been sending messages of warning and urgency too, and sadness.. because few listen. They are under attack from what we are doing. They say please stop. They send warnings, with love. There is always love. They have big brains and big/pure hearts.

In the dream I arrived to a coast which looked like it was somewhere in Western Australia. The first thing when I saw the ocean was orcas very close to shore, leaping out of the water. First I got all excited, but then I felt something was seriously wrong, and then I saw the beached orca, and further down the line beached cetaceans, spreading all over the beach.

This was a surprise for everybody on the bus (I think we were a tour or something, and this was our destination, but whatever the plan was we were going to do, it was interrupted by this scenery...) I couldn't get to the whales quick enough, while others followed, but I also feel that many people had no urge at all of coming and helping. Everything around me disappeared and my focus was on the whales, Huge bodies spread all over the beach. Thinking about this now, after waking up, the whales were all different kinds of whales, and dolphins, and some of them looked very ancient.

I arrive close to this huge black body, and realize I am looking straight into the eye of this whale, which is still conscious, but in pain and very tired and dying. The whale flickers his eye, and moves his little fin, as a sign of acknowledging me. I feel like I was meant to be there, and the whale might have been waiting for me. Now I was there, and I felt so much sadness, I think I was crying all through the dream. I touched the whales body, and looked over and saw a few woman desperately trying to keep the bodies wet, and I started helping them, but it seemed like they had been doing this already for a long, long time, and if felt as if everything was slowly coming to an end.

People started giving up as whales were dying. I only remember much mourning and tears, and the feelings coming from the whales, or that feeling that came to me when I had looked into the eye of that one whale, was so intense, it stayed with me through the dream, and through the night, and through me now. I think I will always remember.

There were a few smaller cetaceans that were still alive in the front of the line, so I went over there and there was some kind of machine holding them in the air, which was good for them, which lifted their weight from their lungs.. they were moving heavily, and I think they were going to be put in the water soon.

Other people started to “wrap” up the dead whales in some kind of bags, and there was one small bag, and a woman came over and showed this special creature that was in it (but dead), It was very colorful, but I wasn't even sure what it actually was, I thought it was a kind of octopus, or very rare animal.. It had red tentacles, and blue-ish body..

I went away slowly, there were no words spoken. I was a little more far from the shore and seeing I was actually in a very industrial area. There was a lot of noise coming from a train, and I remember thinking all this noise might have been part of the disturbance for the washed up whales. Then there was a loud and strange looking plane, that just took off, and flew over the ocean, while dropping part of its body into the ocean. I don't know what that was, or what it was meant to be, but I felt it was some secret military thing or something like that.

I also remember thinking I should burn sage and play flute for all the spirits of the dead whales, and for the ones that survived. I never did that in the dream, but I did that today.

And for all the cetaceans, I have written this down now.. hopefully it can reach people, and bring the message of urgency to you, so you may feel it through your heart and help to get the message out there, to other people, so more people can wake up and be concerned and make changes in their own lives, for the whales and all life!

I also think we can send waves back to the cetaceans, and tell them we think of them, that we got the message and feel their love, and want to help, and have our hearts beating in rhythm with theirs. 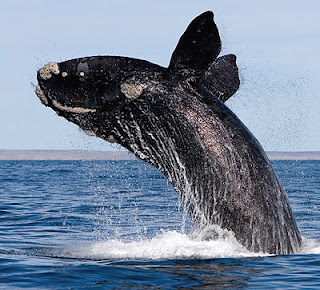 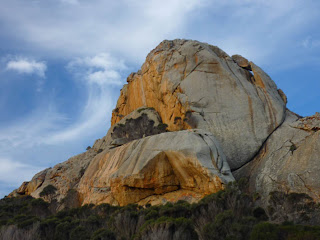 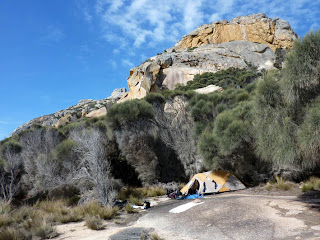 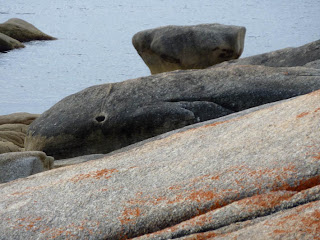 Rock Whale
When we were on Flinders Island, we had a very special whale-encounter.

We had camped out underneath Omahu, and the next day we wandered down the shoreline, attempting to find a way up to climb closer to the top of Omahu. We bush-bashed through and finally arrived on Omahu, quite high up with spectacular views of the ocean and coastline. We sat down for awhile, I played some flute and burned some sage. We almost decided to head off and wander a little more, around the rock up onto the mountain behind Omahu, when my eye suddenly caught something white on the ocean, that looked like a windsurfer. A windsurfer that fell over, and came down with a huge splash, to then rise up again... ? It must be a whale, a whale!!! And certainly so! When not only its flukes, but the whole body rose up from the waters, to then make a beautiful twist and land on its back back into the water, and when the sound reached us several seconds later.. we were more then sure we were seeing a humpback whale, a mother with her baby (I don't like the name calf). It was an amazing experience, and I felt there was a connection between Omahu, the rock itself, us, the flute-music and sage, and the whales. We watched them for a long time, she leaped out from the water a few more times, and I felt overwhelmed for a long time after.. 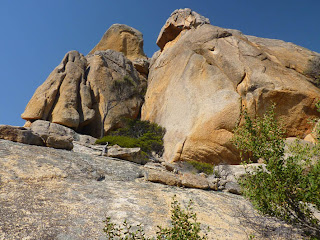 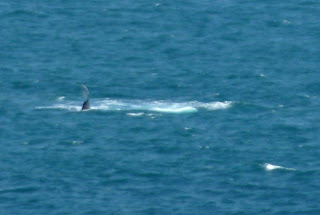 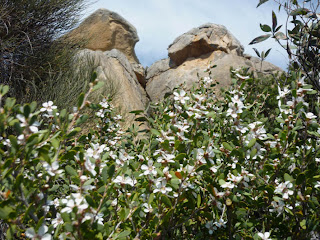 We continued our journey, as they did, and we ended up camping out closer to the bay that night. The next morning we took our coffee and found a perfect spot to watch over the bay, while sipping ourselves awake.

When we saw yet again a big blow coming from the water, we were awake instantly, and were stunned to discover the whales were in the bay, and were slowly taking off into the wider ocean again, as if they had been sleeping there too, and waiting to see us, before leaving.

There are no words to describe the immensity of the feelings that overwhelmed us both times.. So I'll end this chapter with another few images (coming soon), and hope they can transfer the mystical power of these greater beings! Arohanui 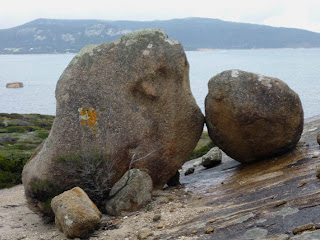 Arohanui
Posted by BlueAquaticSnoezieQ at 9:36 PM 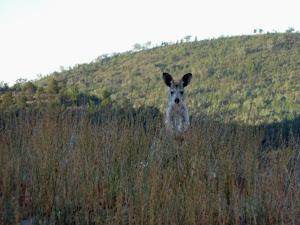 Blogs to check out